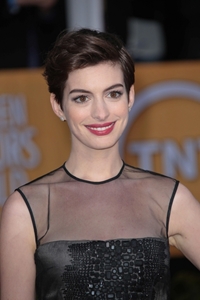 Some of the best celebrity smiles

For actors and other people who find themselves in front of the camera on a regular basis, it’s practically crucial to be able to inspire a few “ooohs” and “aaahs” whenever they flash their pearly whites. Because celebrities are always fun to read about, here’s a selection of a few of the best celebrity smiles, pulled from expert sources around the web.

Halle Berry
We don’t know if Berry – noted for playing Storm in the X-Men movies – ever goes to see a cosmetic dentist. But if so, we wish we could book an appointment with that top dentist. More.com ranks Berry’s flashy, near-flawless set of teeth at the top their list of the best celebrity smiles.

Anne Hathaway
Arguably, the gigantic smile that sometimes comes across the face of this Hollywood A-lister is her most memorable physical feature. Oddly, just like More.com’s pick for the top celebrity smile, Berry, On The Red Carpet’s selection for the number one set of teeth among famous people has also played Catwoman in a major film in recent years. But both Hathaway and Berry are just as well known for their more serious roles, In particular, Hathaway’s credits include turns in the latest film adaptation of “Les Miserables” and the coming-of-age dramedy, “Rachel Getting Married.”

Jennifer Garner
This multi-faceted actor – known for major roles in both action and comedy films – appears on both More.com and On the Red Carpet’s lists of best smiles, which should surprise absolutely no one. With a beaming grin like her’s, it makes you wonder what she’s doing with Ben Affleck, known for box office flops like “Gigli” and “Surviving Christmas.”

Oh, who are we kidding?

Ben Affleck
The Cambridge-bred star has more-than compensated for the negligible poor career choices he made years ago, having picked up a Golden Globe Award and a Best Picture Oscar for his directorial work on “Argo.” He’s also made other dramatic, gritty hit films like “The Town.” A image search for Affleck doesn’t bring about that many pictures of him showing his teeth. It’s possible that he needs to go see his local dentist, but it’s much more likely that he’s trying to maintain a bit of stoic mystique by keeping his smile closed-mouthed.